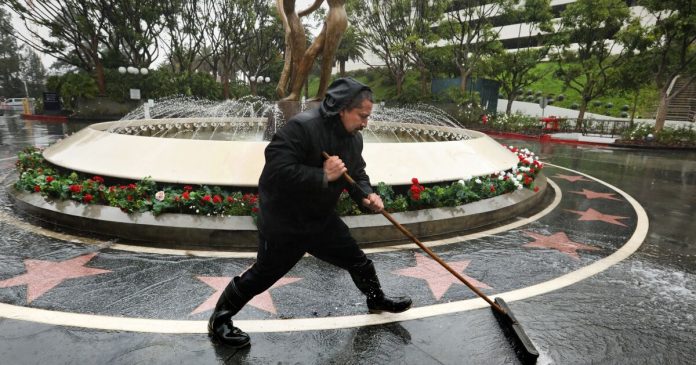 Southern Californians were urged to remain vigilant, and some were forced to evacuate, ahead of the anticipated overnight arrival of a massive, atmospheric river-fueled storm that forecasters say will spawn dangerous surf, whip up heavy winds and drop at-times punishing rain across the region.

While the most profound impacts were expected in Northern California, officials warned of the risk for flash flooding across the entire southwestern corner of the state through Thursday.

“The heaviest rain may be focused on Northern California, but as far as the Southland is concerned, this will be the strongest storm this season so far, hands down,” said David Sweet, a meteorologist with the National Weather Service in Oxnard. “It could be very hazardous.”

Los Angeles County issued evacuation warnings for residents in two northern mountainous communities close to perilous burn scars. And in Santa Barbara County, officials on Wednesday ordered the evacuation of specified properties in and around areas previously scorched by the Thomas, Cave and Alisal fires, citing the risk of flooding and debris flows.

“We are in the beginning stages of a major storm — a powerful event that will be a multihour storm that has the potential to cause major problems across the county,” Santa Barbara County Sheriff Bill Brown said during an afternoon news conference.

Gov. Gavin Newsom on Wednesday proclaimed a statewide emergency to “support response and recovery efforts” across the already-saturated state.

“This may be one of the most challenging and impactful series of storms to touch down in California in the last five years,” said California Office of Emergency Services Director Nancy Ward. “If the storm materializes as we anticipate, we could see widespread flooding, mudslides and power outages in many communities.”

The atmospheric river that moved into California Wednesday is the second in a series of moisture-heavy storms, with more expected in the “next seven to 10 days,” Ward said.

Officials across the state asked residents stay vigilant, heed local guidance and warnings and, if possible, stay home and off the roads during the worst of the storms.

“There’s enough concern with this system that everyone needs to stay on guard,” Sweet said of Southern Californians. “Significant flash flooding and debris flows are possible, especially in and below recent burn scars.”

In L.A. County, the National Weather Service is most concerned about flooding in the Lake fire burn scar around Lake Hughes, north of the Santa Clarita Valley; and the Fish and Bobcat fires burn scars near Duarte.

Los Angeles County officials warned residents near the Lake fire burn scar and north end of the Bobcat fire burn scar in and around the Angeles National Forest to “be ready” for possible evacuations beginning at 1 p.m. Wednesday, “due to the potential for mud or debris flows.”

Karla Nemeth, director of the California Department of Water Resources, said flooding and heavy rainfall are major concerns, but called high winds the “signature” of this storm.

“It’s going to be a difficult commute Thursday morning,” Sweet said. Rainfall in the L.A. area is expected to fall at a pace of up to 1 inch per hour Thursday morning, with the most intense period lasting about three hours, he said.

However, there is a chance those rates could reach up to 1.25 inches per hour in some parts of the Southland, which would heighten the risk for mud and debris flows in recent burn areas, Boldt said.

Throughout the storm, most of L.A. is expected to get 2 to 4 inches of rain, while the mountains could see up to 8 inches, Sweet said. Isolated rainfall totals of up to 10 inches are possible on the south slopes of the Santa Ynez Mountains and western Ventura County mountains.

The storm will also bring strong winds across the region, dangerous surf on the coast and significant snowfall in the mountains, Sweet said. A winter storm warning is in effect for the Los Angeles, Ventura and San Bernardino county mountains, with up to 2 feet of new snow expected for some of the highest regions, and gusts of wind reaching 60 mph.

“Even in the lower elevations, we’ll be looking at wind gusts at 40 to 50 mph, very strong winds,” Sweet said, which means possible power outages, downed trees and other debris concerns.

With the threat of flooding, Sweet said “there’s a lot of opportunity for blocked roads, unfortunately.”

High surf warnings are also in effect for much of the central and southwestern coasts through Friday, with waves potentially reaching up to 22 feet in some areas. There will be a chance of flooding and “some significant beach erosion, especially near times of high tide,” Boldt said. Los Angeles County is offering sandbag pickup at a number of locations.

“Definitely be on the watch out for waves moving up onto the shore and flooding parking lots and walkways, and maybe even some pier damage if we get some big enough waves come into these areas,” he said.

There will also be a slight chance of thunderstorms once the heaviest rains have passed Thursday, Boldt said.

“Those could create their own very brief heavy downpours, but those cells will be fast moving,” he said. “The threat of flooding is still there, but we will be monitoring those closely for both potential heavy rain and gusty winds.”

Nemeth said the state also continues to monitor additional storms expected this weekend and into next week.

“We have multiple storms in sequence,” Nemeth said. “It doesn’t require the same amount of precipitation to inflict significant damage, so we do need all Californians to be attentive to their local county emergency response services and if you do get the word to evacuate, you do need to evacuate.”

Play Halo 5 Before Infinite, Not The Master Chief Collection

Lots of skepticism and worry about emotion recognition not a turnoff...

How technology can combat flooding in emerging markets | Atalayar

The city of Carbon on road to recovery while Eastern Complex...

Parishes considering tornado sirens, others already have them