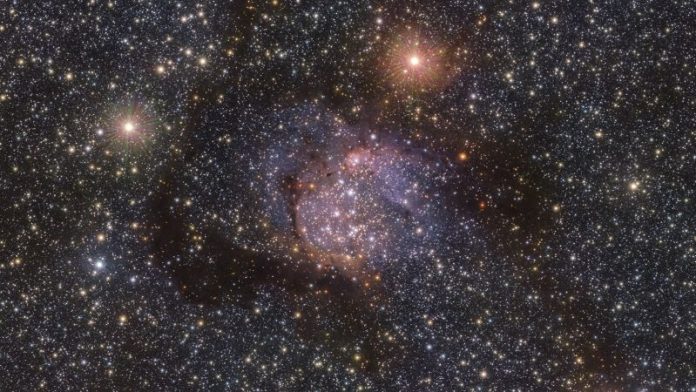 Sign up for CNN’s Wonder Theory science newsletter. Explore the universe with news on fascinating discoveries, scientific advancements and more.

Astronomers glimpsed a stellar nursery in a new light, thanks to the Visible and Infrared Survey Telescope for Astronomy in Chile.

The VISTA telescope, located at the European Southern Observatory’s Paranal Observatory in Antofagasta, Chile, observed the Sh2-54 Nebula in infrared light, which is invisible to the human eye.

While visible light, which is what we can see, is absorbed by interstellar dust, infrared light can pierce through thick dust clouds in space to reveal previously unseen details.

INTERACTIVE: The best space photos of 2022

Infrared imagery of nebulae is helping astronomers learn more about how stars form. The new image revealed a wealth of stars behind the orange glow of the nebula.

Compare the infrared image, which is filled with starlight, to the visible light image of the Sh2-54 nebula using the slider below.

Multiple nebulae, or clouds of gas and dust that fuel star formation, are located at the tail end of the Serpens constellation — so named because of its resemblance to a serpent. These star-birth hotspots include the Eagle, the Omega and the Sh2-54 nebulae.

Astronomers focused in on the Sh2-54 Nebula, located about 6,000 light-years from Earth. The “Sh” in the cosmic object’s name is in reference to astronomer Stewart Sharpless, who was responsible for cataloging more than 300 nebulae in the 1950s.

The image was taken using the highly sensitive 67 million-pixel camera on the VISTA telescope as part of the VISTA Variables in the Via Láctea eXtended survey.

The project repeatedly observes large regions of the Milky Way in infrared light to unlock the mysteries of star evolution.

Nebulae and stellar nurseries have also been part of the focus of the James Webb Space Telescope, which began scientific observations of the universe in July 2022.

So far, Webb has revealed glimmering stars nestled in stellar nurseries like the Orion Nebula, the Carina Nebula and among the famed Pillars of Creation in the Eagle Nebula.

EXPLAINER: What is a pile burn?

Buying a home and worried about wildfires? There’s a free tool...