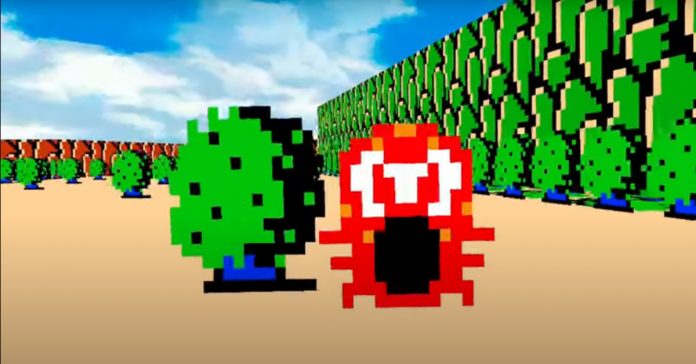 It’s Zeldathon all year here on Polygon — starting today with an unmissable oral history of smooching in the The Legend of Zelda cartoon — and with impeccable timing, a virtual reality remake of the original 1986 Legend of Zelda game has surfaced online. It looks fantastic, if not a little scary.

Posted to Twitter and YouTube by Japanese retro gaming and VR enthusiast Sugary Noe (as spotted by Nintendo Life), this VR Zelda appears to be a mod of a mod. It’s actually the Legend of Doom mod, which faithfully recreates the first Zelda game in first-person within the Doom engine, using all the original maps, assets, and enemy placements. This mod has then been applied to QuestZDoom, which makes Doom playable on Meta Quest VR hardware.

Even witnessed through Sugary Noe’s YouTube playthrough, the added immersion of VR head-tracking makes this 37-year-old game surprisingly tense and threatening. Angry-looking Octoroks lurch from behind bushes, and the first dungeon takes on a claustrophobic, maze-like quality. It’s like stepping inside your memory of playing the game for the first time, and a fitting reawakening for a game that remains unforgiving and mysterious to this day. (I should know — I’m playing it at the moment, for reasons you might be able to guess…)

LEONARDO is a fusion of a bipedal walking robot with a...

140 artificial intelligence-based systems along border to keep watch on China,...

AI Plays the Best Game of Tetris You’ve Ever Seen

Pick One: Which Of These Is Your Favourite Activision Blizzard Franchise?

Embedded board delivers computing performance for digital signage and automation