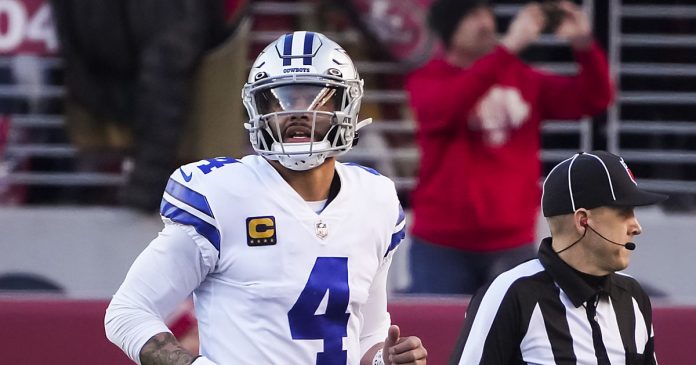 The Cowboys came into the NFC divisional round game with confidence.

Coach Mike McCarthy was relaxed, having been here and done that before as coach of the Green Bay Packers.

As the coach of the Cowboys, McCarthy was met late Sunday afternoon with the same feeling as previous coaches who tried to push this franchise to the NFC Championship — heartbreak.

San Francisco knocked off Dallas, 19-12, to advance to the NFC Championship Game and a date with the Philadelphia Eagles next Sunday.

For the second consecutive season, the 49ers eliminated the Cowboys from the postseason. Last year it was in the NFC wild card round. This season, it was a round later.

Dak Prescott threw two interceptions, Tony Pollard suffered a severe ankle injury and the defense ran out of gas in the fourth quarter. The Cowboys will not be playing for the right to advance to the Super Bowl.

With that, we look at five things of note from Cowboys-49ers:

In the end, Prescott threw two interceptions. Both occurred in the first half, resulting in two field goals. Both throws came with 49ers defenders jumping routes. The first pass to Michael Gallup was picked off by Deommodore Lenoir, who got in front of the receiver. The second pick was tipped off the hands of 49ers defender Jimmie Ward and snatched by linebacker Fred Warner. The latter pass was intended for CeeDee Lamb, who was fantastic Sunday. However, the turnovers by Prescott were a critical part of a difficult day for him. He finished 23-of-37 for 206 yards, one touchdown and two interceptions.

Where do we begin with this first half for the Cowboys? Well, kicker Brett Maher had a point-after attempt blocked. Maher went 1-6 on extra points in the postseason, having missed an NFL record four in the wild-card victory over Tampa Bay. Pollard was lost to an ankle injury, Prescott threw two interceptions and defensive tackle Carlos Watkins was lost to a calf injury. Despite all of this happening, the Cowboys were fortunate to trail, 9-6, at the break.

Pollard was lost toward the end of the first half with a left ankle injury. He was carted off the field from the sidelines with his leg in an air cast. He finished the game with 22 yards rushing on six carries and 11 yards receiving on two catches. The loss of Pollard was massive for a Cowboys’ offense that’s seen its running game slog through the last month of the season, and that’s counting the two playoff games.

Without Pollard, starter Ezekiel Elliott was left to take over and he finished with 26 yards on 10 carries. Rookie Malik Davis was also available but he didn’t get his first offensive snaps until the fourth quarter. Davis probably didn’t get in because of what Elliott can do in pass protection, and with this being the postseason, the Cowboys didn’t trust him enough.

Defense runs out of gas

The defense was outstanding for at least three and half quarters. It made rookie quarterback Brock Purdy look like, well, a rookie. Dallas got pressure on him and it slowed down the run game. But in the fourth quarter, the Cowboys defense tired and gave up two scoring drives. This defense also had two chances to pick off passes. Cornerback Trevon Diggs, who dropped a potential interception, also tried to hit tight end George Kittle instead of going for the ball as Kittled bobbled it before securing the catch. That player went for 30 yards. Dallas’ defense just didn’t do enough in a game where the offense struggled. It’s almost unfair, but it’s the reality.

“Flawless” flyby for BepiColombo turns up its first photos of Mercury