It’s a zero-sum game that’s eating up a huge amount of cash. But Electric Utilities are loving it.

By Wolf Richter for WOLF STREET.

In the press release for its investor conference today, GM said that it plans to double its annual revenues by the end of the decade as it transitions to EVs. In terms of the math, 8% in price increases a year for nine years would do that without having to jump through the hoops of selling more vehicles. GM’s average transaction price in Q3 in the US jumped by 20% year-over-year. So…  I don’t see this statement as sign of an increase in volume, but an increase in prices.

GM confirmed that logic by pointing out that it expects its margins to increase as it transitions to EVs. It said that half its manufacturing capacity in North America and China will be capable of producing EVs by 2030.

Sales growth in this industry is obtained by selling higher-priced vehicles. But volume growth, in terms of the number of vehicles sold, is hard to come by in the auto industry. There are some developing economies where sales are still growing. But there has been no growth in developed economies in two decades.

But the one segment that is growing in leaps and bounds is EVs. And that’s what GM’s investor conference was about – creating investor excitement about this “transition to EVs,” from a Chevrolet crossover “priced around $30,000,” to the high-end Hummer EV pickup truck with 1,000 hp.

And it’s a very costly transition.

The big legacy automakers – GM, Ford, FCA owned by Stellantis, Volkswagen, BMW, Mercedes, the Japanese automakers, the Korean automakers – have all announced investments to the tune of billions of dollars each, or tens of billions of dollars each, in creating their EV models, building EV manufacturing plants, beefing up their software operations, and creating or expanding research operations, manufacturing plants, and supply chains for batteries.

The amounts of money going into these efforts by legacy automakers are just mind-boggling. GM announced that it would invest $35 billion through 2025 in EVs and driver-assistance and self-driving technologies. Volkswagen – along with Toyota, the largest automaker in the world – plans to invest $86 billion over the next five years on its EV programs.  Ford is investing over $30 billion in its EV programs through 2025. Tesla burned through more than $20 billion in cash it had raised from investors to get to where it is today (it raised more cash last year through huge equity sales, but hasn’t burned that cash yet).

The auto industry has never seen this type of mega-investment wave – and investor enthusiasm is going to be required to fund it.

Tesla hit BMW and Mercedes Benz right where it hurts with its low-volume luxury sports sedan (Model S) and then with the near-luxury Model 3. And then it came out with cheaper models, including a compact SUV, and this is the mass market, this is the sweet spot in the US, this is where the volume is. And it has been threatening to come out with a pickup truck, that would hit Ford, which has already abandoned sedans in the US and is dependent on its F-series trucks, the best-selling vehicle of all times.

Tesla shook up the legacy automakers that had fallen asleep, and now it’s life-and-death for them. EVs are the only segment that is growing, and the growth rates are huge, and they’re doing so at the expense of vehicles with internal combustion engines (ICE). There is no net gain in overall sales volume. This is a zero-sum game at best.

The math is terrible for legacy automakers – requiring huge investments to produce uncertain earnings and big risks. But they finally came to grips with it.

In addition, the industry now has to contend with numerous startups around the world, including a dozen or so in the US and something like 300 in China, that are all clamoring to become “the next Tesla.”

These are crazy numbers. No one needs this much power in a pickup, but hey, this is a new thing, and EVs make it possible without breaking a sweat.

Pickups and SUVs define the US market. Big is good. Powerful is good. Electric motors are small. They have a nearly flat torque curve, which is ideal for performance driving, towing, and stop-and-go traffic. And they use the energy from braking with their electric motors to charge the battery. Motors with a combined 600 hp can generate a lot more energy from braking, and can brake harder, than a 200 hp motor. Long steep downhills with a big trailer? Stop and go traffic? Every time the driver steps on the brake, EVs charge the battery.

The problem is the battery, and that’s where tens of billions of dollars and much of the research efforts are flowing into. GM has already learned first-hand how expensive it can get when the battery that someone else manufactured has flaws and ends up burning down the cars.

The key technology for EVs is the battery technology. That’s where the costs are, and the challenges. The rest of the EVs is much cheaper to manufacture than ICE vehicles.

Given the small size of powerful electric motors between the axles, front and back, and the ability to put the battery packs where the floorboard used to be – the so-called skateboard platform – automakers have a design freedom that they don’t have with ICE vehicles. Here’s GM’s EV platform:

But so far, automakers have not taken advantage of this design freedom. They have been sticking to the classic lines designed for ICE vehicles, worried that a radical design change could turn off consumers.

But profits, after billions of investments, could be thin.

Combined, automakers will plow hundreds of billions of dollars into the EV segment for years to come. As competition in the EV segment mounts, profits could be thin.

Overall sales volume of EVs and ICE vehicles combined is going to be long-term stagnant at best, a zero-sum game. An EV sold likely means an ICE vehicle that wasn’t sold. For automakers this could mean cannibalizing very profitable sales of ICE vehicles with less profitable EVs.

And this is what they get for investing hundreds of billions of dollars into this segment.

For people who have watched this industry for decades, this is the most exciting moment. The industry had become calcified. Now change is afoot – a change forced upon them by the market.   There will be shakeouts too. I’m not sure how the investors will fare. But they get to do their own math.

In the US, the problem that electric utilities have is two-fold:

1. Enormous idle capacity at night when electricity demand is small compared to peak demand during the day. Capacity is designed for peak demand (hot afternoons in the summer, for example). For the rest of the time, some of this capacity sits there and costs money, but doesn’t generate revenues. Idle capacity is expensive for utilities – and rate payers are paying for it.

2. Electricity sales have been stagnant for years. For the US overall, electricity sales by electric utilities to the end users, such as households and industrial installations, has gone nowhere in over a decade, due to higher efficiencies of electrical equipment (LEDs, A/Cs, etc.), the impact of rooftop solar, and other factors: 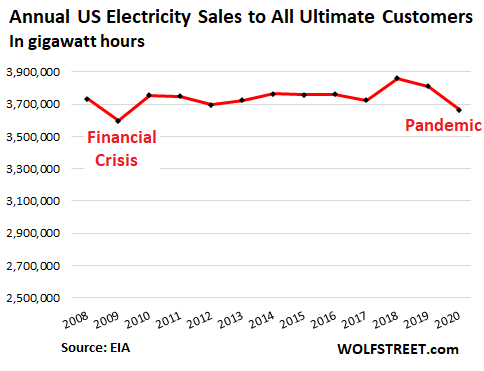 In California, electricity sales have trended lower for over a decade, and the growth of EV charging has not halted the decline in electricity sales. The decline started with the push for energy efficiency (LEDs, appliances, industrial equipment, A/Cs, building insulation, etc.).

Even in Texas, electricity sales only increased by a total of 9% in 10 years — less than 1% per year! This is a no-growth industry for utilities even in Texas, and more growth would make their investors exceedingly happy. 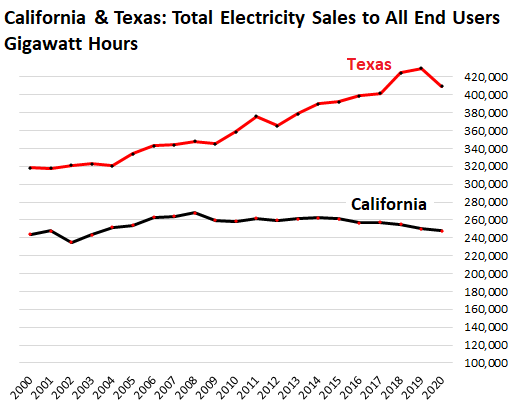 In areas where time-of-use billing has been implemented, ratepayers get cheaper electricity at night as an inducement to use the idle capacity – and they’d charge their EVs with cheaper juice.

Electric utilities are ecstatic about EVs. Selling electricity is their business. Capacity additions to meet growing demand are easy to fund when utilities can demonstrate that these investments will generate revenue growth.

That’s how utilities operate: They make a big capital investment, such as a power plant, with cheaply borrowed money, that produces revenue growth and income growth for decades. The stagnating demand environment over the past decade challenged that business model. And demand from EVs, when it finally starts to show up, would be a big boost for utilities.

Enjoy reading WOLF STREET and want to support it? Using ad blockers – I totally get why – but want to support the site? You can donate. I appreciate it immensely. Click on the beer and iced-tea mug to find out how:

Would you like to be notified via email when WOLF STREET publishes a new article? Sign up here.

Metal roofs are a great defense against wildfires. Click here or call 1-800-543-8938 for details from our sponsor, the Classic Metal Roofing folks.

Classic Metal Roofing Systems, the leader in fire safe roofing for residential applications, manufactures products that are 1/20 the weight of most tile products and eligible for Class A, B, or C fire ratings as determined by roof preparation.

Observing the Changing Nature of Security within Organizations

A Tesla Chinese Rival Has Bad News for EVs

Kentucky teacher connects with students — and their families — after...

Blue Origin to Bid on NASA Lunar Contract After Loss to...

DC Is About to Have Some Wild Rain Thanks to the...

‘They’re in limbo’ | Debate over extending the eviction moratorium continues

Men creating AI girlfriends to verbally abuse them and boast about...