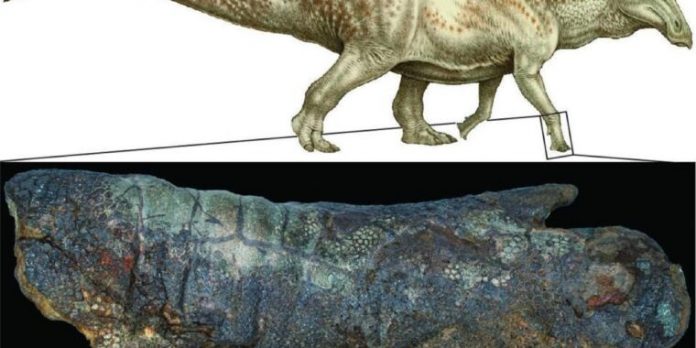 There’s rarely time to write about every cool science-y story that comes our way. So this year, we’re once again running a special Twelve Days of Christmas series of posts, highlighting one science story that fell through the cracks in 2022, each day from December 25 through January 5. Today: Why dinosaur “mummies” might not be as rare as scientists believed.

Under specific conditions, dinosaur fossils can include exceptionally well-preserved skin—an occurrence long thought to be rare. But the authors of an October paper published in the journal PLoS ONE suggested that these dinosaur “mummies” might be more common than previously believed, based on their analysis of a mummified duck-billed hadrosaur with well-preserved skin that showed unusual telltale signs of scavenging in the form of bite marks.

In this case, the term “mummy” refers to fossils that with well-preserved skin and sometimes other soft tissue. As we’ve reported previously, most fossils are bone, shells, teeth, and other forms of “hard” tissue, but occasionally rare fossils are discovered that preserve soft tissues like skin, muscles, organs, or even the occasional eyeball. This can tell scientists much about aspects of the biology, ecology, and evolution of such ancient organisms that skeletons alone can’t convey.

For instance, last year, researchers created a highly detailed 3D model of a 365-million-year-old ammonite fossil from the Jurassic period by combining advanced imaging techniques, revealing internal muscles that had never been previously observed. Another team of British researchers conducted experiments that involved watching dead sea bass carcasses rot to learn more about how (and why) the soft tissues of internal organs can be selectively preserved in the fossil record.

In the case of dinosaur mummies, there is an ongoing debate over what appears to be a central contradiction. The dino mummies discovered so far show signs of two different mummification processes. One is rapid burial, in which the body is quickly covered and advanced decomposition is substantially slowed and the remains are protected from scavenging. The other common pathway is desiccation, which requires the body to remain exposed to the landscape for a period of time before burial.

The specimen in question is the partial skeleton of Edmontosaurus, a duck-billed hadrosaur, discovered in the Hell Creek Formation of southwestern North Dakota and now part of the North Dakota State Fossil Collection. Dubbed “Dakota,” this mummified dinosaur showed evidence of both rapid burial and desiccation. The remains have been studied with various tools and techniques since 2008. The authors of the PLoS ONE paper also performed CT scans of the mummy, along with an analysis of the grain size of the surrounding sediments in which the fossil was found.

There was evidence of multiple gashes and punctures in the forelimb and tail, as well as holes and scrapes on the arm, hand bones, and skin in the shape of an arc, much like the shape of crocodile teeth. There were also longer V-shaped gashes on the tail that could have been made by a larger carnivorous predator, such as a juvenile Tyrannosaurus rex.

The authors concluded that there is likely more than one pathway to dinosaur mummification, settling the debate in a way that does not “require a spectacularly unlikely convergence of events.” In short, dinosaur remains might be mummified more often than previously believed.

In the case of Dakota, the deflated appearance of the skin over the underlying bones has been seen in other dino mummies and is also well documented in modern forensics studies. The authors believe Dakota was “mummified” via a process called “desiccation and deflation,” involving incomplete scavenging, in which animal carcasses are emptied as scavengers and decomposers target internal tissues, leaving behind skin and bone.  Per David Bressan at Forbes, this is what likely happened to Dakota:

After the animal died, his body was likely scavenged by a bunch of crocodiles, opening the carcass at its belly, and colonized by flies and beetles, cleaning bones and skin from the rotting flesh. Such incomplete scavenging would have exposed the dermal tissue insides, after which the outer layers became slowly desiccated. The underlying bones would prevent the empty hull from shrinking too much, preserving the finer details of the scaly skin. Finally, the now mummified remains were buried beneath mud, maybe by a sudden flash flood, and circulating fluids deposited minerals, replacing the remaining soft tissue and preserving a cast in the rock.

“Not only has Dakota taught us that durable soft tissues like skin can be preserved on partially scavenged carcasses, but these soft tissues can also provide a unique source of information about the other animals that interacted with a carcass after death,” said co-author Clint Boyd, a paleontologist at the North Dakota Geological Survey.

ChatGPT Could Revolutionize The Internet, But Its Secrets Have Experts Worried...

Tech stocks have been crushed. What’s next for the FAANGs?

A Plant That ‘Cannot Die’ Reveals Its Genetic Secrets