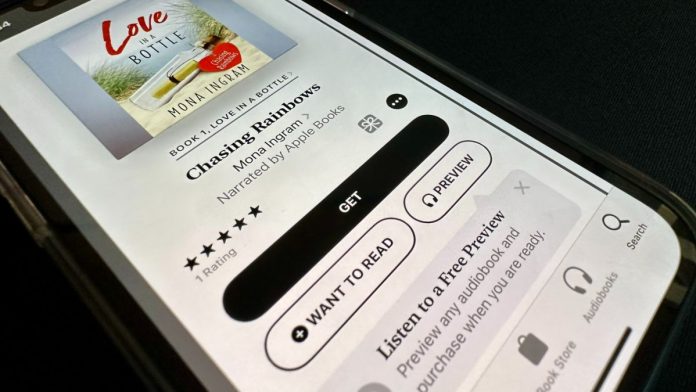 Apple has just launched a brand new feature for its Books app that will let you listen to written titles as audiobooks, narrated by artificial intelligence.

The feature, delayed from November last year, lets users choose books that feature AI narration, and features a swathe of new books that are “narrated by digital voice based on a human narrator.”

As noted by The Guardian (opens in new tab), the new initiative “marks an attempt to upend the lucrative and fast-growing audiobook market.”

The Guardian reports that Apple has approached multiple independent publishers as potential partners for the new AI audiobook narration service,  but that “not all agreed to participate.”

Apparently, companies were not told that Apple was behind the technology at the time, but that “the company” would take on the cost of production, with writers receiving royalties from sales.

Publishers involved have reportedly had to sign non-disclosure agreements, which is quite standard when it comes to working with Apple.

One skeptical publisher told the outlet that the narrator “brings a whole new range of art in creating an audiobook, and we believe that’s a powerful thing,” adding value to the work as an art form, suggesting that using AI to create an audiobook is perhaps a bit soulless. Yet Apple sees this as a chance to raise the profile of previously unheard titles.

“More and more book lovers are listening to audiobooks, yet only a fraction of books are converted to audio — leaving millions of titles unheard,” Apple’s website states. “Many authors — especially independent authors and those associated with small publishers — aren’t able to create audiobooks due to the cost and complexity of production. Apple Books digital narration makes the creation of audiobooks more accessible to all, helping you meet the growing demand by making more books available for listeners to enjoy.”

There are four voices to begin with, two focused on fiction and romance. There are also two voices for nonfiction and self-development — you can listen to them all here. The limited scope of the rollout suggests more genres and voices are in the pipeline.

Apple says wholesale price limits will apply to books and they’ll be solely distributed via Apple Books, with publishers and authors retaining rights to the audiobooks, which means there are no restrictions on producing and distributing other versions of an audiobook.

Authors who want to have their books turned into AI-narrated audiobooks will need to use Apple’s preferred partners for production and distribution, as well as meet some other criteria. The service is only available for English language books (for now).

We’ve given the audiobooks a quick listen, and first impressions are pretty good. This isn’t Siri reading out your favorite audiobook, but rather an all-new voice AI based on that of a human’s. It sounds far more natural than Siri, but there’s enough of a tint of automation to keep reminding you something’s not quite right. If this takes off and enough people like it, then it could turn Apple’s Books app into one of the best iPhone apps for enjoying not only written titles, but also audiobooks too.

Breaking: Here’s your first listen to Apple’s brand new AI narrated audiobooks feature. It’s not Siri, but it’s not quite human. Would you listen to this? pic.twitter.com/A8TZEBI7xkJanuary 5, 2023

The full details of Apple Books digital narration can be found here.

How to Switch Internet Providers as Painlessly as Possible

How Did the FN Meka Mess Happen?

Got an Old Android Phone? Repurpose It With These 9 Creative...

Apple VR Headset is unlikely to work with metaverse as it...