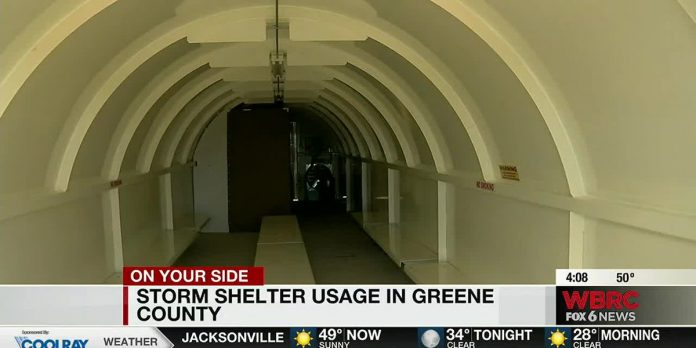 EUTAW, Ala. (WBRC) – If there is one positive element in the constant threats of tornadoes in our area, it’s that more and more people are taking the storms seriously. One west Alabama town is seeing it first hand.

In all of Greene County, there are four storm shelters. Three of them are the traditional steel tube shelters.

The town of Eutaw uses the basement of a school not far from downtown. Town officials say in that basement shelter alone, 15 people took advantage in November during a tornado threat. There was a significant jump earlier this month when 60 people hunkered down in the same shelter.

Corey Martin says the town has already gotten a couple of calls about the potential threat of bad weather Tuesday, even though for now it’s a considered a low threat for that part of the state.

“I’m going to say awareness. We do a pretty good job of getting the word out there. Hopefully people are aware of the potential for severe weather. After two tornadoes in 60 days, they have an appreciation of how it can be,” said Eutaw PIO Corey Martin.

Corey Martin says Eutaw has applied for a grant to re-do part of the Carver school basement to make it more handicap accessible.

Get news alerts in the Apple App Store and Google Play Store or subscribe to our email newsletter here.

Polar Vortex arrives with a vengeance

The FCC has a new broadband map. Vermont officials say it...

Pixel 6 rumors: Google’s upcoming smartphone could get a few handy...

One of our most incredible discoveries on Mars might just be...