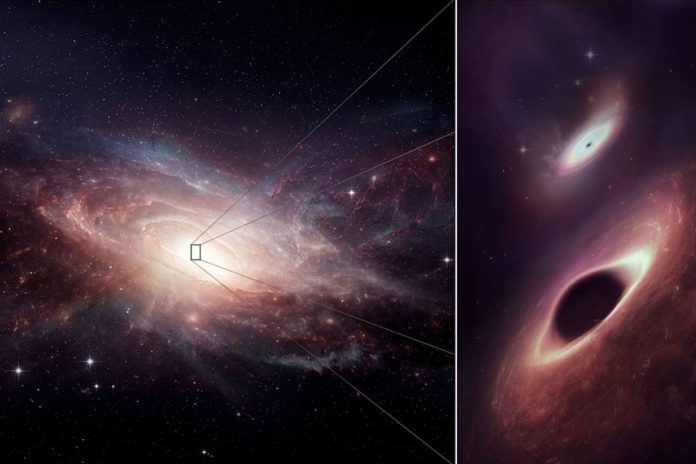 Stars like our sun are violent creatures — constantly spewing out radiation, gamma rays and all kinds of nasty stuff (though luckily Earth’s ozone layer and atmosphere protect us from the worst of it.) But when stars die, especially big ones, their wrath becomes even more merciless. Stars at the end of their life cycle that are sufficiently huge will collapse in on themselves, forming a black hole. These singularities are defined by their gravitational pull, which is so incredibly strong that nothing — not even light — can escape. In other words, what happens in a black hole stays in a black hole.

The closest two supermassive black holes ever recorded are each about 200 million and 125 million times the mass of our sun.

Supermassive black holes really live up to their name, but if two were to bump up and mutually envelope each other, it would create one of the most insanely large explosions in the universe — sending out reverberations in the form of gravitational waves that would ripple throughout the entire universe. Scientists recently announced the discovery of just such a situation: the closest two supermassive black holes on a collision course, at least that humans have detected so far. The discovery also suggests that merging black holes may be more common than previously believed.

Despite their relative frequency and unfathomable size, finding a supermassive black hole is no easy task. They don’t generate light of course; thus, scientists have to deduce the size and location of black holes using indirect clues, such as how they warp spacetime, their effect on nearby stars, the speed of orbiting nearby stars, and the detection of tremendous gravitational waves that are produced when black holes smack together. When this happens, two become one even more massive black hole.

To find these particular two supermassive black holes, a team of 29 scientists had to crunch a lot of data. They analyzed records from a dozen instruments across seven telescopes scattered around the world and in orbit, including the Hubble Space Telescope, the Keck Observatory in Hawaii and the cluster of 66 radio telescopes in a desert in Chile known as the Atacama Large Millimeter Array. They were looking at UGC 4211, a galaxy tucked away in the constellation of Cancer.

The gap between them “is fairly close to the limit of what we can detect, which is why this is so exciting.”

No single observation was enough to pinpoint these gigantic dead stars, but together the data paints a clear picture. At the center of UGC 4211 — which is technically two galaxies that crashed into each other — is an extremely bright blob of matter called the active galactic nuclei (AGN). Astronomers believe that AGNs are caused by supermassive black holes, but when they looked closer and closer at the center of UGC 4211, they found not one black hole, but two. Their research was published this month in Astrophysical Journal Letters.

Both are approximately the same size and they appear to be super close together — again, the closest two supermassive black holes ever recorded — and are each about 200 million and 125 million times the mass of our sun. Thankfully, these monstrosities are nowhere near us, positioned some 480 million light-years away from the Milky Way.

The gap between them “is fairly close to the limit of what we can detect, which is why this is so exciting,” Chiara Mingarelli, one of the study authors and an associate research scientist at the Flatiron Institute’s Center for Computational Astrophysics in New York City, said in a statement.

“It’s important that with all these different images, you get the same story — that there are two black holes,” Mingarelli added, comparing this new multi-observation research with previous efforts. “This is where other studies [of close-proximity supermassive black holes] have fallen down in the past. When people followed them up, it turned out that there was just one black hole. [This time we] have many observations, all in agreement.”

But when it does happen, the wave of energy it will blast out into space will be incomprehensible. First, the two former stars will swirl ever closer, eventually crashing and sending out gravitational waves larger than anything humans have ever captured before. Currently, the biggest black hole merger ever detected by Earth’s gravitational wave observatories resulted in a new black hole with a mass of 142 solar masses (or 142 times our Sun’s mass). Upon merging, eight solar masses were deleted from the universe and immediately converted into energy in the form of gravitational waves. When these two supermassive black holes merge, the energy release will be exponentially greater.

This research is about a lot more than just finding some cool space objects. It can help us better understand the evolution and life cycles of stars and might help astronomers pinpoint more black holes in the nearby universe. In turn, this information might help researchers better calibrate gravity wave detecting devices. Black holes may be mysterious and hard to find, but it just got a little easier to know how and where to look.

about what’s happening in space

The Orionids meteor shower is set to peak this week

Mutalk is a wireless microphone that covers your entire mouth

Fusion of Near and Mid-Infrared Shows Pillars of Creation Like Never...