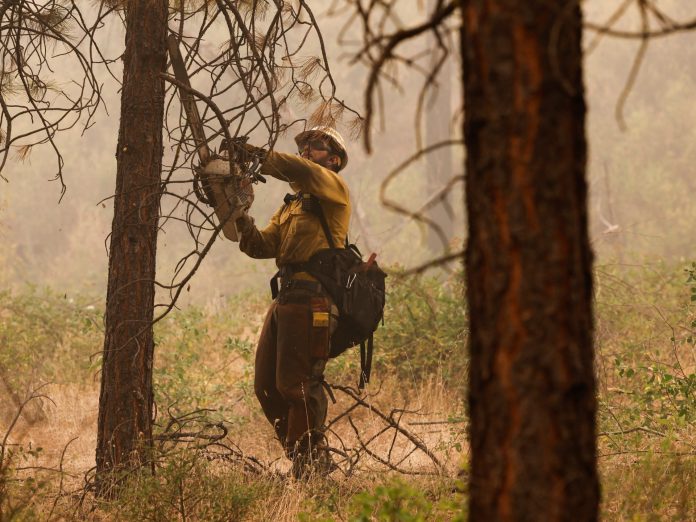 The United States government has announced it will spend about $930m to fund forest-thinning operations in western states struggling to cope with explosive wildfire seasons.

The funds will help finance projects to clear trees and excessive underbrush in fire-prone areas of 10 western states, where blazes have consumed nearly 300,000 square kilometres (115,000 sq miles) and burned about 80,000 structures over the last decade.

“It’s not a matter of whether or not these forests will burn,” US Secretary of Agriculture Tom Vilsack told reporters. “The crisis is upon us.”

The allocation of such funds represents a growing emphasis on the need for projects that can mitigate the intensity and dangers posed by wildfires.

While wildfire is a natural and even healthy part of the ecosystem, a number of factors have come together to create wildfire seasons that have exploded in size and intensity over the last several decades.

Those factors include rising temperatures and drought that have dried out trees and foliage, partly due to climate change. Insect outbreaks have also killed millions of trees, leaving forest floors packed with dry kindling that helps fuel massive conflagrations.

Experts point to another factor – older approaches to forest management that emphasise suppressing fires as soon as they break out. Decades of fire suppression efforts have left many forests overgrown and densely packed with easily combustible plant matter.

In an effort to address that issue, firefighter groups and scientists have called for a greater emphasis on the kind of mitigation projects the $930m will help finance.

However, those funds represent a small portion of the more than $50bn that the US Forest Service says will be necessary to meet the goal of lowering wildfire risk across 200,000 sq km (80,000 sq miles) of public and private lands over the next 10 years.

Other issues also persist. Plagued by low pay and the growing strain of larger and more intense wildfire seasons, government agencies tasked with tackling these fires have struggled to recruit and retain workers.

Experts warn the workforce in agencies like the Forest Service needs to expand to keep up with the demands of fires that continue to shatter records.

In California, the five largest fires in state history have all taken place since 2018, despite an unusually subdued season in 2022. The largest, the August Complex fire in August 2020, scorched a previously unheard-of 404,700 hectares before it was finally contained.

Vilsack has warned that “draconian” budget cuts floated by some Republican legislators would hobble the government’s ability to meet the challenge. A Republican majority took control of the US House of Representatives this January.

“There’s one big ‘if’,” Vilsack said. “We need to have a good partner in Congress.”

“Given the scale of how much needs to be done, we are just skimming the surface,” said Kimiko Barrett, a researcher at the nonprofit group Headwaters Economics. “Risks are increasing at a scale and magnitude that we haven’t seen historically. You’re seeing entire neighbourhoods devastated.”

What is Linda Evangelista’s Net Worth?