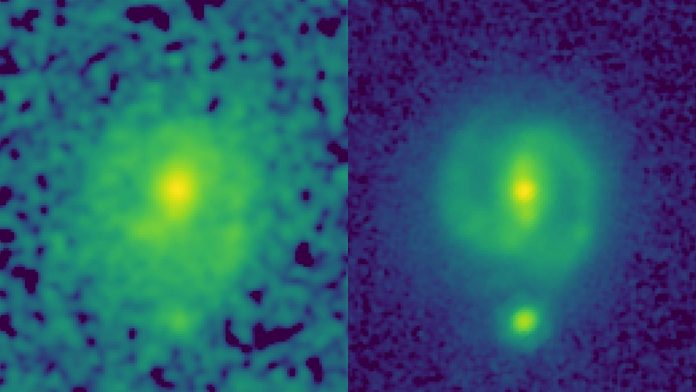 The Webb Space Telescope’s latest target is one previously imaged by Hubble: the distant barred spiral galaxy EGS23205. Targets like this one will boost our understanding of the early universe and how ancient stars and galaxies took form.

The two images above show EGS23205 as seen by Hubble and Webb. Hubble’s image of the galaxy (taken in near-infrared) is much noisier, and the structure of the galaxy is harder to discern. But Webb’s image (at mid-infrared wavelengths) is much crisper, revealing a clear bar of stars stretching out from the galactic center.

Stellar bars are huge galactic cross-sections composed of countless stars. The bars play an important role in galactic evolution; they push gas toward the galactic center, helping fuel star formation and feed the supermassive black holes that lie within galactic nuclei. Our own Milky Way is a barred spiral galaxy.

Analysis of the image was submitted to the preprint server arXiv last year. Webb has imaged many ancient galaxies in its mere six months of scientific operations.

Some of Webb’s targets are among the earliest galaxies yet seen, and they appear to Webb as they were just several hundred million years after the Big Bang (the universe is now close to 14 billion years old).

EGS23205 is seen as it was about 11 billion years ago. The image reveals that even early galaxies had well-defined bars (spiral galaxies were previously thought to be much later arrivals in the universe).

“The bars hardly visible in Hubble data just popped out in the JWST image, showing the tremendous power of JWST to see the underlying structure in galaxies,” said Shardha Jogee, an astronomer at UT Austin and co-author of the research, in a press release.

Webb has previously imaged other objects once captured by Hubble. In October, the new $10 billion observatory beheld the Pillars of Creation, huge plumes of gas and dust in the Eagle Nebula. In the same month, the Webb team produced an image of merging galaxies 270 million light-years from Earth, imaged by Hubble back in 2008.

The two space telescopes observe at different wavelengths for the most part—Hubble primarily at visible wavelengths and Webb primarily in the infrared and near-infrared. Webb’s vivid handiwork is built on the mechanical shoulders of Hubble. Side-by-side image comparisons show the differences in these impressive observatories, and what’s possible with the newest technology.

More: The Year Ahead in Astronomy

All of Fade’s contract items in VALORANT

North Texas tornadoes: What we know about each one Friday

China is building a miniature helicopter to fly on Mars

New Data Leads To Rethinking (Once More) Where The Pandemic Actually...

Russian Spacewalk Cut Short Due to Issue With Suit

Factbox: Half of S&P 500 is in correction territory, or worse