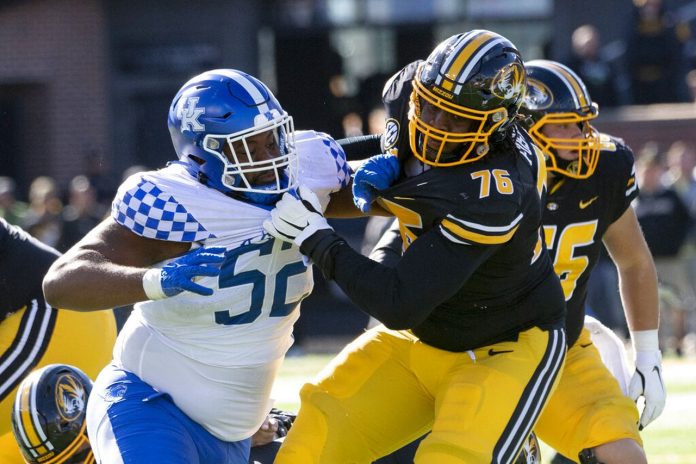 Hugh Freeze was confident that he’d be able to retool Auburn’s roster “fairly fast” upon taking the job on the Plains.

While it remains to be seen how successful he is on that front — the results will play out on the field — the first-year coach and his staff certainly put in the effort to restock the team’s personnel and address some key areas of need during the early signing period and, in a more immediate sense, the NCAA’s first transfer portal window. That 45-day transfer period ended this week, with Auburn’s haul of transfers — 12 new additions, plus the retention of defensive lineman Zykeivous Walker, who previously left the team in October — ranked third nationally in the 247Sports team transfer rankings.

Auburn signed six new players on each side of the ball, with a clear emphasis on the line of scrimmage and adding depth at linebacker. In all, the Tigers brought in three experienced offensive linemen who could start immediately at the two tackle spots and center this fall, added some key pieces along the defensive line and snagged two linebackers with SEC experience. They also signed a trio of skill-position players on offense: a former consensus All-American to add depth to the running back room, an experienced and productive big-bodied wide receiver and a talented tight end.

The only need that really went unanswered to this point was quarterback, where Freeze has said the Tigers would like to add a transfer if it’s the right player and right fit. Until then, Auburn will head into spring practices with a room that features returning starter Robby Ashford, former starter T.J. Finley and redshirt freshman Holden Geriner (2023 signee Hank Brown will arrive in the summer).

Overall, it was an initial transfer haul that garnered universal praise from experts and national media as the first transfer period closed this week. Here’s a look at what is being said about Auburn and Freeze’s transfer class:

— Auburn was one of the big winners of the first transfer window, according to 247Sports’ Chris Hummer, who had high praise for Freeze’s prioritization of addressing both sides of the line of scrimmage during the 45-day window.

— Auburn was one of a handful of teams that “pounded the portal” during the initial window. While Freeze and his staff were active in their efforts during those 45 days, On3 national expert Jesse Simonton wants to check back in 12 months from now to see how the situation played out for the Tigers and other active portal teams.

— ESPN’s Craig Haubert believes USF transfer running back Brian Battie, a former consensus All-America return specialist, is one of the biggest steals of the transfer window.

“Playing for a program that has won just three games the past two seasons, he remains a bit overlooked,” Haubert wrote. “That may not be the case in 2023. The Tigers lose Tank Bigsby, but return a more powerful runner in Jarquez Hunter, which can make Battie a nice complementary player in the backfield. Considering Battie was an All-American returner during his time at USF, he could have an additional impact for Auburn.”

— ESPN’s Tom Luginbill believes Auburn is one of three teams, along with Georgia and Oklahoma, that best addressed their needs during the first transfer window. Notes Luginbill: “New coach Hugh Freeze knows all too well that to compete in the SEC, he needs his best players at the line of scrimmage.”

— The Athletic’s Max Olson says the “new regimes at Auburn, Louisville, Colorado, Nebraska and Cincinnati all deserve credit for the quality and quantity of their early transfer pickups.”

— Rivals credits Freeze after “Auburn strengthened its roster without losing key players to the portal,” specifically making note of the Tigers’ additions on the offensive line with WKU tackle transfer Gunner Britton, ECU center transfer Avery Jones and Tulsa tackle transfer Dillon Wade. They’re also confident Freeze will have no trouble adding a quarterback during the May transfer window.

— 247Sports’ Brandon Marcello believes Auburn is a team that could jump into the top-25 next season because of its success in the transfer portal but thinks the Tigers still need to add a quarterback. “If they wait until (May), I think Auburn will be No. 1 or No. 2 on the list for a lot of these top transfer quarterbacks in that second window, and that could change things for Hugh Freeze and Auburn.”

— Athlon Sports calls Auburn one of the big winners of the first transfer portal after a clear theme emerged for the Tigers: the line of scrimmage.

What Bandcamp’s Acquisition by Epic Games Means for Music Fans and...

Why are other countries still buying our debt? | Making Sense...

Is the future of the microchip industry going to be Made...