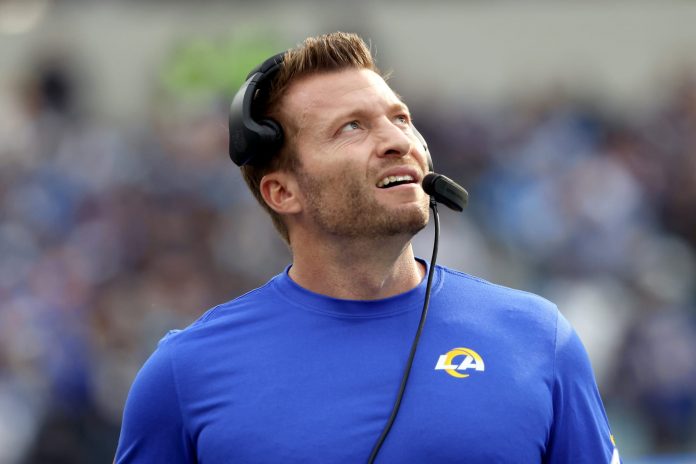 You can be angry over the proliferation of rumors that are spreading like wildfire right now about the future of LA Rams head coach Sean McVay.  You can be frustrated with the number of reports that have sprung up. But there is no longer any denying that the rumors are real, are based on conversations that some of the most respected NFL insiders have had on the subject, and the reports are far short of promising.

ESPN NFL Insider Adam Schefter is already reporting that the future of LA Rams head coach Sean McVay is “in limbo.” And you can catch his story below.

And then you have a similar report from NFL Network’s own NFL Insider Ian Rapaport, who reports that due to recent events that include marriage, events in Ukraine (his wife’s family live in Ukraine), and the toll that a losing season has taken on him, Sean McVay will take some time this offseason to weigh out his options.

The @NFLGameDay Notebook with @TomPelissero and @MikeGarafolo: #Broncos receive permission to speak with Sean Payton; #Rams coach Sean McVay will take time away to weigh his future; #Giants are expecting to start Davis Webb; The #Dolphins should have Teddy Bridgewater backing up. pic.twitter.com/4VRZk3WCPe

And now this latest report comes from Fox Sports Senior National Writer and host of Good Morning Football, Peter Schrager. Personally, I believe that Peter Schrager is as plugged into the LA Rams organization as anyone, and the messaging from Schrager is that Sean McVay is a bit ‘burnt out,’ for lack of a more accurate term.

Could this week be Sean McVay’s last game as head coach of the Rams?@BillSimmons and @PSchrags discuss McVay’s future as the Rams’ head coach following a down year with the team. pic.twitter.com/udFnP5R96C

This is no longer speculation folks. The word is out that Sean McVay is spent, and he wants a break from football. Now here is where it gets worrisome and intriguing.

We know that LA Rams All-Pro defensive lineman Aaron Donald was tempted to retire just one year ago, and when lured back to play in 2022, made multiple statements about playing as long as head coach Sean McVay coached the Rams.

But that now begs the question, what if Sean McVay doesn’t coach the Rams?

That same scenario could play out for LA Rams quarterback Matthew Stafford, who has played a long and productive career. Would he play longer without Sean McVay at the helm of the LA Rams organization?

The uncertainty of McVay’s future is just the tip of the iceberg for this offseason. As this story gains traction, there will be plenty of other Rams rumors spring up as well. I’m not ‘reporting’ them, merely giving you all the heads up as additional rumors spring to life.

More Asian countries are getting in on the trend

Android 13 Is a Subtle Improvement Over Android 12

Emerging markets must attract much more finance for climate tech

Man gets busted trying to use Apple AirTag as stalking tool