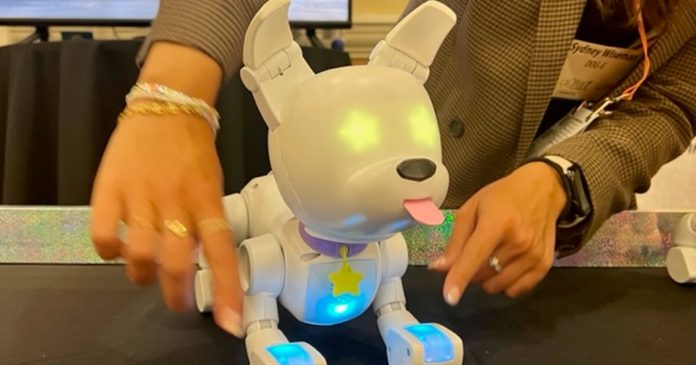 Pet lovers see their dogs as special, one-in-a-million creatures. Soon you’ll be able to get a robot that’s one in a million, too. Dog-E from tech toymaker WowWee ($80), launched at CES, is an app-connected robot dog that’s unique to each of its owners, thanks to its more than 1 million possible combinations of lights, sounds and personality traits.

Read more: Check out our must-see reveals of CES, most futuristic tech and wildest future tech and gizmos

Out of the box, the robot dog features different colors of collars and tails. Then, when turned on for the first time, Dog-E’s all-while body will light up in a surprise color, though kids can change it later through the connected app if they don’t like what they get.

Dog-E by WowWee: The Robot Dog That Communicates Through…

The puppy then comes to life in a “minting” process as kids pet and play with it, gradually revealing its specific personality. Some dogs will always be hungry, while others might be more playful or shy, WowWee says. You can train the dog to do tricks, give kisses and “talk” by displaying text and emojis when it wags its tail.

I had some fun playing with one of the prototypes on display at a press event this week. When I scratched the top of Dog-E’s head, it nuzzled my hand. The robot dog was small and light with a soft feel to it. It didn’t have the heavy, clunky feel of similar toys I’ve tried out in the past.

I’m curious what my kids would think of Dog-E. They’ve been begging for a dog for years, but living in a small New York City apartment has kept that from happening. Would they settle for a Dog-E? Probably not, but I can still imagine my 8-year-old playing with this, at least for a while.

Dog-E is available for preorder now through the company’s website. It will be available online and at retailers in time for the 2023 holiday season — the website currently suggests a shipping month of September 2023.

Hundreds said to have opted to leave Twitter over Elon Musk...

How the industrial metaverse will transform manufacturing

The Societal Dangers of DALL-E 2

The Observer view on the Cop26 climate talks | Observer editorial