A wildfire camera that was monitoring the Dixie Fire in California has captured footage that shows it becoming fully engulfed by the spreading flames. The green treeline transforms to burnt ash as the fire spread in front of and past the camera.

The camera is positioned at Indian Ridge, which according to the Sacramento Bee and the San Francisco Chronicle is about 15 miles southeast of Lake Almanor, on the northeastern edge of the raging Dixie Fire. At the time of capture, the footage shows the Fly Fire, which has since merged with the Dixie Fire to become one giant wildfire.

“The Alert Wildfire camera on Indian Ridge photographed the Fly Fire Saturday afternoon as it spread vigorously toward its location,” Wildfire Today writes. “The camera is north of the community of Keddie and northwest of Mt. Hough and Crystal Lake. These first four pictures were shot during a five-minute period, 2:22 p.m. to 2:26 p.m. on July 24, 2021.” 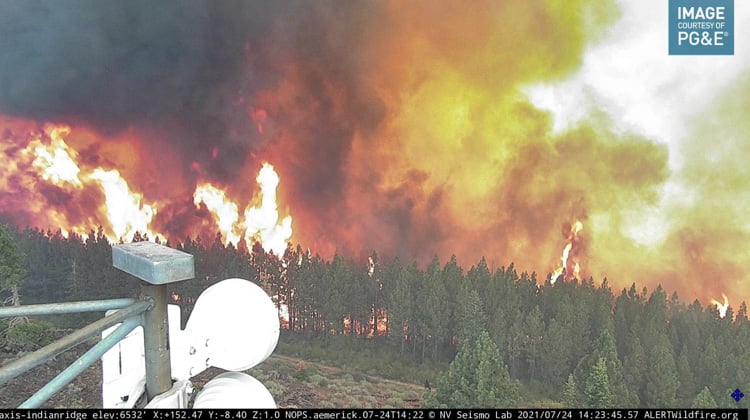 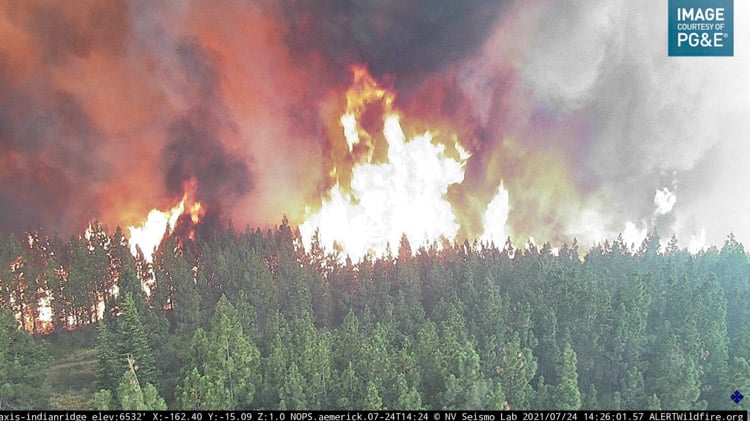 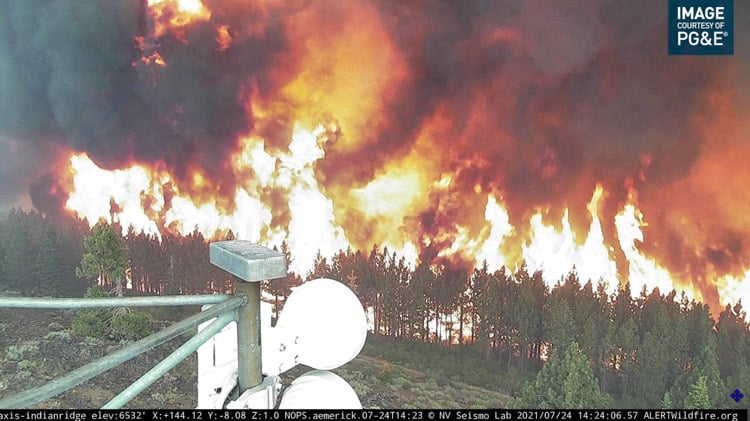 “Judging from the photo below taken from the same camera almost two hours later at 4:10 p.m., the camera survived but the lens needs a little cleaning,” the publication continues. 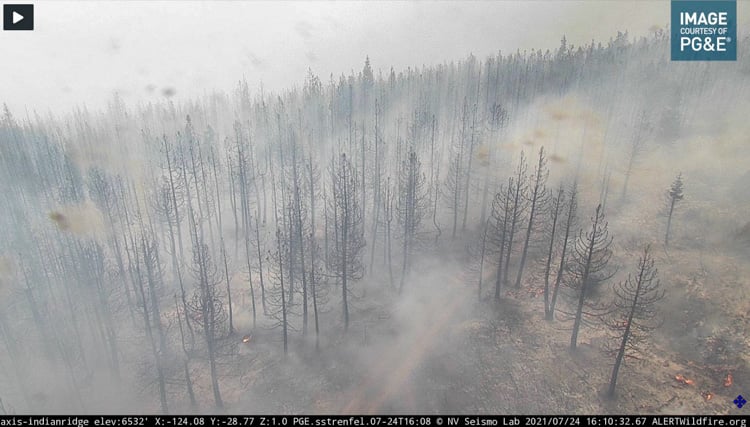 The Alert Wildfire camera network consists of more than 700 cameras that are designed to survey areas that are prone to wildfires and provide information to firefighters and first responders about the status of the fire and allow them to better strategize how to put out blazes.

ALERTWildfire is a 21st-century online firespotting system where the public can go to spot and report wildfires. ALERTWildfire uses near-infrared vision to locate smoke at a very early stage, allowing firefighters more time to assess the situation and mobilize appropriate resources, saving taxpayer money as well as our forests, grasslands, property and lives.

The Indian Ridge camera footage here shows the first burns this year in the area but survived the fire as it scorched its region.

Last year, which was a record year for wildfires, other Alert Wildfire cameras were less lucky: five, including three in the San Francisco Bay Area, were destroyed by the intense flames.

Video of our Indian Ridge camera getting burnt over during the #DixieFire The video is from 7/24/21 1400-1500pst pic.twitter.com/ZR6wIglgCD

The Dixie Fire has been burning since July 14 has merged with the smaller Fly Fire. It has burned over 200,000 acres, has joined the state’s top 20 largest fires in its history, and is currently only 23% contained.

Much of NH in moderate drought

Recruiters are checking a layoffs site to find workers

Macworld Podcast: What will happen at WWDC?

Why Your Business Continuity Plan Should Include the Cloud