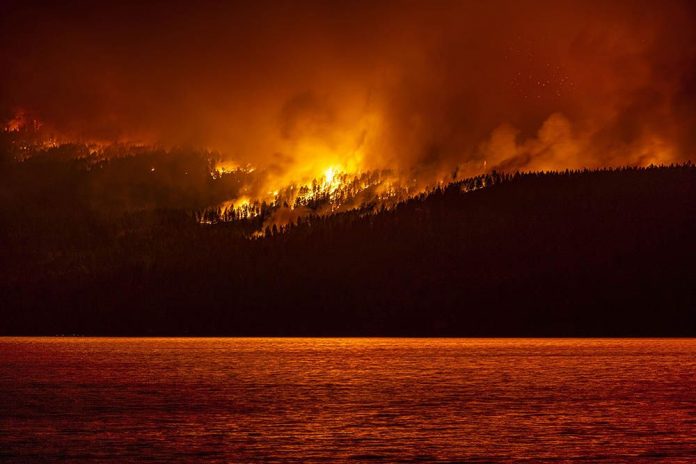 For some time health officials have been monitoring the toll climate change-accelerated disasters, such as wildfires and hurricanes, have been taking on mental health.

Tens of thousands of British Columbians have been displaced in recent years because of massive wildfires, and doctors here say they have noticed an increase in anxiety related to climate change following some of B.C.’s most catastrophic fires.

Start your day with a roundup of B.C.-focused news and opinion delivered straight to your inbox at 7 a.m., Monday to Friday.

A welcome email is on its way. If you don’t see it, please check your junk folder.

The next issue of Sunrise presented by Vancouver Sun will soon be in your inbox.

We encountered an issue signing you up. Please try again

Now, a new study from the University of California San Diego links exposure to extreme wildfires not only with mental health illness, but also with cognitive decline.

The study, published Wednesday in PLOS Climate, found California’s devastating wildfires have had long lasting effects on cognition, particularly the ability to process information in the presence of visual interference.

NEATLabs researchers at the University of California in San Diego used behavioural testing and EEG recordings to examine how exposure to the state’s deadliest wildfire, the Californian Camp Fire of 2018, affected cognitive ability six to 12 months after the event.

The 75 participants were tested on standard cognitive tests to assess selective attention, inhibitory control, interference processing, and working memory, and results were compared between those who had been exposed to the wildfire and those who had not.

Jyoti Mishra, an associate professor of psychiatry at UCSD, said wildfire exposure was associated with having difficulty focussing on simple tasks.

“What we wanted to do with this study was to see whether subjective experiences with trauma are related to any objective changes in cognitive and brain functioning,” said Mishra, in an interview Tuesday.

What they found was even those who participants who were indirectly affected—so for example someone worried about the air quality— had the same cognitive difficulties and problems as the participants who lost their homes, for instance.

“Not to say that climate trauma is exactly PTSD, but I just find it interesting that these overlap,” she said.

She added that this research underlies how important it is to develop programs and medical supports for people, particularly as climate-change related disasters become more extreme.

UBC Faculty of Medicine professor Dr. Steven Taylor, an expert in anxiety disorder, said he’s not surprised by the study’s results, and that many wildfire survivors do experience PTSD.

He said there is the mental anguish that comes from losing a home or being on an evacuation order. But there is also the stress that comes from either reading about it happening to members of the community, or being worried about the air quality from the heavy blankets of smoke that much of the province experiences in the summer during wildfire season.

“There’s that sense of apocalyptic doom that you get when these big heavy clouds blow over communities and suddenly, the sun is blotted out and the temperature drops by a couple of degrees,” he said.

“This really can impact mood. It’s certainly one of the more vivid reminders of what is to come in terms of climate change.”

He added that there have also been studies linking cognitive decline to the particulate matter that is in the air from wildfire smoke. Also, depression goes up, particularly among those who are directly impacted.

“Substance abuse and domestic violence certainly increased in the aftermath of wildfires. I think partly what that reflects is these these fires raise the stress levels of communities astronomically and there are all kinds of different layers of stress, but then you’re adding in poor air quality, and that’s just another stressor.”

Mishra said for their study EEG recordings showed that those who were exposed to the wildfire also showed greater activity in the frontal cortices of their brains, indicating that they were putting forth more cognitive effort, and still not performing as well.

The scientists conducted brain wave recording, and use standard cognitive tests. In this case, participants identified visual stimuli on a screen, while distractions were staged around those visual stimuli.

Then, the scientists measured how well they could distinguish certain visual stimuli with all these distractions happening around them, while conducting brainwave recordings.

“Individuals may be distressed about what’s happening to their close relatives or friends in the community,” said Mishra.

“Even if you may not be directly impacted what’s happening in your community it is definitely impacting you.”

Taylor said there are red flags to watch for with mental health after massive disasters like wildfires or floods.

He said it may be time to seek medical advice if friends and family say you don’t seem to be your usual self or that you are unusually irritable. Other indicators may be not sleeping at night because of climate anxiety, eating too much or too little, or taking more alcohol and drugs than you normally would.

Ways to combat the anxiety include practicing mindfulness, going for a walk in nature, and switching off your phone from time to time so you won’t be tempted to doom scroll, he added.

Exploring how future tech can benefit people in the workplace —...

Ray of joy: Nasa captures image of the sun ‘smiling’ |...

I still don’t know what the metaverse is, but it has...

Hundreds of giant sequoias may have been killed in California fires,...