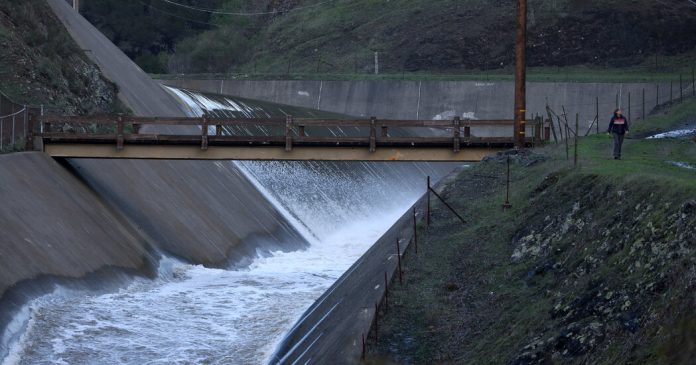 The onslaught of rain in California has state officials, scientists and others wondering if it will be enough to end three years of drought that were the state’s driest on record.

It’s still too soon to answer that question. And there might be a better one, anyway: If the drought does end, how long will it be over?

If California’s recent climate history is a guide, not for long.

According to the United States Drought Monitor, in this century there have been four periods of persistent drought in California — 2001-04, 2007-09, 2012-16 and the current drought, which began in 2020. Between each drought there were only a few years of wet weather — and it was often extremely wet, as is occurring now.

“What we’re seeing is what I and others are calling weather whiplash,” said Peter Gleick, co-founder of and senior fellow at the Pacific Institute, a research organization specializing in water issues. “We don’t seem to get average years anymore.”

Drought has returned relatively quickly each time in part because of natural climate variability. Dry years have always happened and will continue to happen.

But research by Park Williams, a climate scientist at the University of California, Los Angeles, and others shows that global warming caused by the emission of greenhouse gases is in effect loading the dice, making it more likely that a given drought will persist or become more intense, and less likely that a string of wet years will continue.

A 2015 study, for example, found that the odds of the state suffering an extreme drought like the one that began in 2012 had doubled as the world warmed over the prior century.

“Is warming part of the story? Yes,” Dr. Williams said. Rising temperatures, he said, have many effects that can make droughts worse, including a reduced snowpack as more precipitation falls as rain, earlier snowmelt and runoff, and faster drying of soils.

The natural variability of precipitation in California is a factor, too. Even the wet period between the drought that ended in 2016 and the current one was highly variable, with two extremely wet years, 2017 and 2019, sandwiching a very dry one.

About half of the state’s precipitation comes from the kind of storms being experienced now, long plumes of moisture known as atmospheric rivers that ride in from the Pacific Ocean. In some years there are relatively few of them, and they may be weaker, holding less moisture. At other times, like the last few weeks, there may be several of them in rapid succession.

It is not completely clear if or how climate change is affecting atmospheric rivers. But even if there is little impact, the high variability of precipitation in California reduces the likelihood of many consecutive, extremely wet years that could fully break a drought.

How will iPhones with under-screen Face ID affect the Dynamic Island?

Discovering the Secrets of the Universe: A Wondrous Star Factory

The future of a portless iPhone is already here – and...

Research Says Solar System Is Surrounded By A Magnetic Tunnel