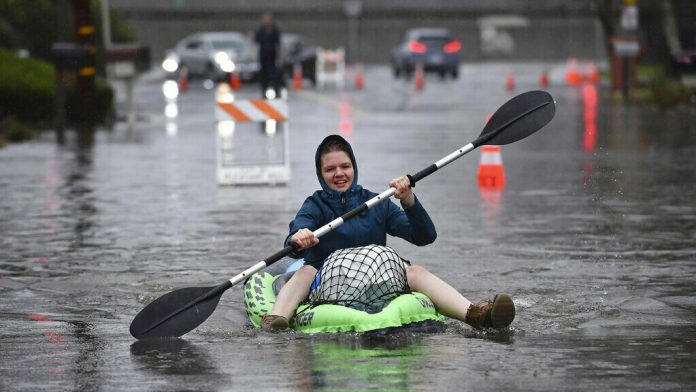 Nurse Katie Leonard uses a kayak to bring supplies to Patsy Costello, 88, as she sits trapped in her vehicle Dec. 31 on Astrid Drive in Pleasant Hill, Calif.. Costello drove her car on the flooded street thinking she could make it, but it stalled in the two feet of water.

Nurse Katie Leonard uses a kayak to bring supplies to Patsy Costello, 88, as she sits trapped in her vehicle Dec. 31 on Astrid Drive in Pleasant Hill, Calif.. Costello drove her car on the flooded street thinking she could make it, but it stalled in the two feet of water.

In a world getting used to extreme weather, 2023 is starting out more bonkers than ever and meteorologists are saying it’s natural weather weirdness with a bit of help from human-caused climate change.

Much of what’s causing problems worldwide is coming out of a roiling Pacific Ocean, transported by a wavy jet stream, experts said.

At least one highway in drought-mired California looked more like a river because of torrential rain from what is technically called an atmospheric river of moisture. New Year’s brought shirtsleeve weather to the U.S. East and record high temperatures to Europe as the Northern Hemisphere on Wednesday was more than 2.6 degrees hotter than the late 20th century average. And this is after frigid air escaped the Arctic to create a Christmas mess for much of the United States.

“All the ingredients are in place for two weeks of wild weather especially in the Western U.S.,” private meteorologist Ryan Maue said in an email.

Maue said the big driver is a three-year La Nina — natural temporary cooling of the equatorial Pacific Ocean that alters world weather patterns — that just won’t quit. It is creating literal waves in the weather systems that ripple across the globe. And on certain parts of the waves are storms where the atmospheric pressure drops low and quickly, called bomb cyclones, that are quite wet, and they travel on atmospheric waves that transport the weather called the jet stream.

The jet stream now is unusually wavy, said Maue and Woodwell Climate Research Center climate scientist Jennifer Francis. The storms dip over the warm subtropics “and create a conveyor belt of of moisture to strafe the West Coast of the U.S,” Maue said.

More than 5 inches of rain fell on Saturday in the Sacramento area and California braced for bigger storms Wednesday and Thursday. As of Wednesday, snowpack was third highest in 40 years, more than 170% of normal.

Francis points to a “blob” of warm sea water off the Aleutian Islands, a phenomena that is happening more often, and a ”crazy warm” Arctic — Wednesday it was 5.8 degrees warmer than the 1979-2000 average — as part of what’s juicing up the Pacific.

And with a wavier than normal jet stream, extremes of all kinds go up and down and around the planet, Francis said.

“You can think of it like a jump rope. When you start to flick it at one end, that ripple goes through the whole jump rope eventually,” Francis said Wednesday. “And so it could be that the waving as such, being perhaps driven in the Pacific, could be accentuating it also over Europe.”

200 cyclists, some dressed in costumes, ride their bikes Saturday on the ski slopes during the start of the 33rd edition of the ‘GP St-Sylvestre’, a new-year snow mountain bike race, in the alpine resort of Villars-sur-Ollon, Switzerland.

200 cyclists, some dressed in costumes, ride their bikes Saturday on the ski slopes during the start of the 33rd edition of the ‘GP St-Sylvestre’, a new-year snow mountain bike race, in the alpine resort of Villars-sur-Ollon, Switzerland.

A weather station in Delemont, Switzerland, on the French border, smashed its January record with an average daily temperature of nearly 65 Fahrenheit on the first day of the year. In Bucharest, Romania, on Tuesday it broke a January record at 63 degrees Fahrenheit and it was 64.2 Fahrenheit in the Russian Republic of Dagestan, according to extreme weather tracker Maximiliano Herrera.

Swiss weather service MeteoSuisse quipped on its blog: “… this turn of the new year could almost make you forget that it’s the height of winter.”

This extreme weather has “a silver lining,” especially with the record heat in Europe in January easing winter heating fuel crunches caused by Russia’s invasion of Ukraine, said Colorado meteorologist Bob Henson of Yale Climate Connections. And California, where there’s been a more than 20-year megadrought that worsens wildfires, is getting much-needed rain and snow — too much of it, actually.

Roads and levees in California were washed out early in the week. Schools were closed Wednesday in the San Francisco area as more than 8,000 sandbags were given out in anticipation of extensive flooding. Flights were cancelled.

“Excessive rainfall over already saturated soils will result in rapid rises on creeks, streams and rivers as well as flooding in urban areas,” forecasters said in a report.

Except for the impressive record heat in Europe, “which is yet another example of the manifestation of human-induced climate change,” Northern Illinois University meteorology professor Victor Gensini said he finds nothing too unusual.

Weather is naturally extreme “so the recent events we’ve been seeing can occur naturally,” said Weather Underground co-founder Jeff Masters now at Yale Climate Connections. “But with the disruption to global weather patterns that climate change is bringing the probability of seeing unusual weather events in any season increases.”

To Err Is Human; To Mistakenly Bite Is Baby White Shark

Secure Your Home Wi-Fi Network Now to Ward Off Hackers and...

Virus samples in ancient glacier may help predict our future

Google is bringing more context to the websites you visit on...